Is Khloe Kardashian Engaged? Look At This Ring She Posted. 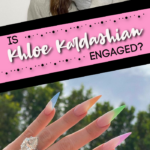 The Kardashians — they are the family that just keeps on giving us the news, aren’t they?

Well, the news according to Instagram anyway — which is really how MOST of us get our pop culture news, right?

Khloe posted the most epic picture of her neon claws nails, but the thing that can’t be missed at the center of the photo is the GINORMOUS diamond rock sitting on her left ring finger.

Well, now. We don’t mean to speculate — yes, we do — but there is only one thing this can really mean, right??

The larger than life Instagram post features the caption 💜🤍💛🧡💚💙 but, doesn’t mention anything about her fiance (?) — er’ boyfriend (?) — Tristan Thompson.

I mean, OBVIOUSLY, the post has left the entire world speculating that nuptials are in the future for the pair.

It is HIGHLY possible, as she IS a Kardashian after all, that she is just trying to get the content hearts on her IG post.

BUT, that is an awfully huge random rock on her engagement ring finger.

What the heck does that even mean??? Gah!!

Now, according to Yahoo, Khloe has been wearing a rock on her finger since late February.

I mean, that is awfully long in pop culture time NOT to have some kind of answer as to whether this means an engagement is at hand.

Engagement rumors first sparked (in February), when she posted a picture promoting her new line of Good American shoes while wearing that same perfect, sparkling ring.

So, what exactly does it all mean?

Are they engaged? Are they not? Do you even care?

We’ll let you know as soon as we nail down some concrete answers as to the mystery of the rock.

4shares
This Pop-Up Tent Can Be Assembled In Seconds Just By Throwing It In The Air
← Previous
Cheetos Has A New Mexican Street Corn Flavor That Has All Of The Flavors Of The Real Thing
Next →
Click here to cancel reply.