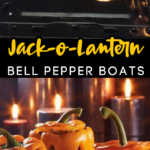 Usually we carve pumpkins in the kitchen to turn into jack-o-lanterns but most recently, inspired chefs and hungry artists are carving bell peppers for Halloween.

Similar to the color of pumpkins, orange and yellow bell peppers are best when carving a spooky face onto your main dish for dinner.

Whether or not you prefer carving triangular eyes, a nose and spiky teeth or one eye winking with a half smile, make sure to do so before placing in the oven to cook at 400 degrees.

Not to mention, make sure to wash and like a regular pumpkin spoon out the seeds so that your bell peppers are cleaned out in order to stuff the cooked meat and shredded cheese in your bell pepper for taco Tuesday.

Bake for 12 minutes until each bell pepper is soft and golden brown.

Instead of a glowing light inside of a pumpkin, you’ll have glistening cheese stuffed inside of a few jack-o-lantern bell peppers for dinner!