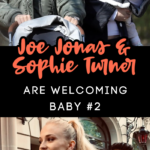 Joe Jonas and Sophie Turner are about to welcome baby number two.

You may be thinking, “Didn’t they just HAVE a baby?” They did, but that was nearly two years ago! Time flies, right?!?

Little Willa was born in July 2020. But, they are expecting a second little one soon.

How Do Joe Jonas and Sophie Turner Feel About Becoming Parents For the Second Time?

Apparently, they are crazy happy about their upcoming leap into a family of four.

Sophie and Joe were overjoyed to learn they are expecting a second child.

A source to Entertainment Tonight

Of course they are, right?

They both have siblings and didn’t want their daughter to be an only child and have talked about having a bigger family. The couple recently celebrated Sophie’s birthday, as well as the pregnancy.

A source to Entertainment Tonight

Now, technically, the couple have not said or commented on the fact that Sophie is pregnant for the second time. They have been pretty hush-hush about it. But, that’s no surprise. They did the same thing when they were expecting Willa.

The couple have been historically very private about their personal lives. We haven’t yet seen an official picture of Willa, although Sophie had this to say when the U.K. celebrated their mother’s day.

I’m so grateful to the two loves of my life for making me a mama. @JoeJonas and my beautiful baby girl. It’s my favorite job I’ve ever had.

How Do We Know Sophie Turner Is Pregnant With Baby #2?

Sophie has been out and about with Joe — her baby bump there for all to see.

Now, the media has been known to get pregnancy news incorrect — but it is getting more and more obvious that Sophie is, indeed pregnant.

Now, we don’t even know a due date yet, and the sex of the baby is a mystery — but I’m sure we will find out soon enough.

For now, we can say congratulations to the happy little family of three on their impending move to a family of four.

Of course, we will stay on baby watch and let you know as soon as the news drops about the birth of Sophie and Joe’s second little one.