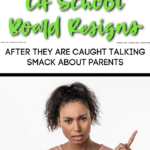 Oh, man!! Have you ever said something, and IMMEDIATELY regretted it?!?

Can you IMAGINE saying something accidentally on purpose into a hot mic — one that is on — and the whole room accidentally hears your immediate regret?

That is EXACTLY what happened to an ENTIRE  San Francisco Bay Area school board — the Oakley Union school district.

Now, I’m not condoning what they did or said, but you know they had some IMMEDIATE mad regret.

OMG. Can you even imagine the feeling they must have had in the pit of their stomach — you know that feeling of, “Oh, crap!!”

I mean, it completely serves them right for being so sh***y to and about parents, but YOWCH!!

So, what happened is, the school board was having a virtual meeting — how many times have we heard about a Zoom call going wrong?!? — and the, now former, school board members were caught saying awful things about the parents.

“Are we alone?” Kim Beede — she says about 34 times that she is the former president — asks.

Kim goes on “defended herself against a parent who chided her on social media for going to a party during the coronavirus pandemic after declaring it wasn’t safe to return to school.”

I wasn’t doing anything bad — Bitch, if you call me out, I’m going to fuck you up — sorry, that’s just me.

Kim Beede in a meeting of the Board of Trustees

All the other board members laugh at this. Maybe they were laughing nervously, but regardless, they didn’t say anything. They just laughed.

HELLO — you are on a regular meeting of the Board of Trustees. You didn’t think someone was going to see or hear it?? *SMDH*

Lisa Brizendine chimes in, “You know, they forget that there’s real people on the other side of those letters that they are writing,” talking about parents.

I think THEY forget that THEY are supposed to be there to help and represent those parents, who only have their child’s best interest at heart.

Brizendine goes on to say, “We are real community members. We have kids — or have known kids — that have gone to these schools. We have a VESTED interest in this process, and they don’t know what we do behind the scenes. And, it’s really unfortunate that they want to pick on us, because they want their babysitters back.”

This is apparently in response to parents who are calling for their kids to go back into the classroom.

Now, I want MY kids to be able to go back, but if you think it’s because I want a babysitter, you are SORELY mistaken.

I am as freaked out as the next person about contracting COVID, but my kids NEED the one on one interaction with the teachers. They NEED contact and communication with their peers.

They are suffering GREATLY at home. Their grades have dropped, they are depressed, and they are hanging by a thread.

If my school board made the comment that I just wanted a “babysitter” for my children — I’d be pissed off too!!

Richie Masadas, god help him, made the comment, “My brother had a delivery service for medical marijuana. The high clientele were the parents with their kids at school. When you have your kids at home, no more (inaudible).”

To this, all the other board members laugh hysterically.

Kim Beede — you can see a physical change in her appearance — makes the realization that, “Oh, we have the meeting open to the public right now.”

At this point, the feed goes dead, so apparently they then made the meeting private.

In response to this meeting of the Board of Trustees, the public — INCLUDING the mayor — called for the IMMEDIATE resignation of the board.

This situation garnered national attention, and all four of the board members stepped down.

We deeply regret the earlier comments that were made in the meeting of the Board of Education earlier this week. As trustees, we realize it is our responsibility to model the conduct that we expect of our students and staff, and it is our obligation to build confidence in district leadership; our comments failed you in both regards, and for this we offer our sincerest apology.

Joint Statement from all four of the, now former, board members

Too little, too late, AMIRITE?!?

Lawd, can you just IMAGINE them having to live amongst those parents now?? Sucks to be them!!

You can hear the whole 8 minute exchange HERE.