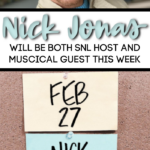 Saturday Night Live has a treat for us all this weekend!!

But wait — he isn’t JUST going to be the musical guest!

Nick is going to taking over the show as both host AND musical guest at the SNL show on February 27th.

It’s going to be his first time hosting the show, but I know he is going to dominate that SNL stage!

A dream come true. Let’s get it @nbcsnl!! See you February 27th!

Now, don’t think that just because he hasn’t hosted before, that he’s never been on the SNL stage.

Way back in 2009, the Jonas Brothers — Nick, Kevin, and Joe — appeared on SNL for the first time, and CRUSHED their performance.

A decade later — in 2019 — the Jo Bros reunited to perform as the musical guests on SNL.

There is a reason that Nick Jonas is appearing on SNL, besides the fact that he is awesome.

Nick has a music single coming out on the 25th — “Spaceman” — and everyone needs to go buy it!

Not only is his single dropping, but it has been announced that Nick will rejoin the cast of The Voice for it’s 20th (!!) season on March 1st.

But wait, there’s more!! Nick has a film coming out — Chaos Walking — and it is dropping on March 5th.

So, this is a great time for THIS Jonas Brother to show his face on the SNL stage.