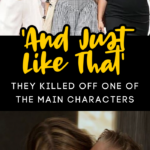 The Sex and the City reboot, And Just Like That, has dropped on HBOMax, and OMG!!

If you haven’t watched it yet, don’t read ahead — there WILL be spoilers.

The premier episode of the NEW Sex and the City came with shockers — that maybe we knew were coming, but it was still jarring to experience.

In the very first 5 minutes of the show, we learn what happened to Samantha.

Her pride got hurt when Carrie told her she couldn’t (or it didn’t make sense to) stay her publicist, and she took off to London without another word.

She said, ‘Fine,’ and then fired me as a friend. I kept leaving her voicemails, asking her to please call me back, so we could talk about this and fix it. Look, I understand that she was upset, but I thought I was more to her than an ATM.

Miranda and Charlotte also talk about how Samantha ghosted them at the same time. Unfortunately, Samantha let her pride get in the way of the friendships, and that was that.

And, there we have it — Samantha is written out of the show. Of course, they left it open for her return — but, let’s be honest, it probably isn’t going to happen.

But, the jarring moment that really had us glued to our screens and grabbing the tissues, happened at the very end of the episode.

They went and killed off one of the main characters of the show.

As the minutes were ticking down, and the show was about to come to a close, Carrie’s husband, Mr. Big made his big exit.

Carrie had gone to Lily’s piano recital, so Big decided to get in a little time on his Peloton (of course) bike.

We knew something was about to happen, because the dramatic music really began to swell.

Big goes to take a shower, and drops his phone. We see him grab his left shoulder — and that’s it.

Carrie gets home, but by this time it is far too late. She grabs him, and starts sobbing and screaming with the shower running over them both.

In the last seconds of the show, we hear Carrie say, “And just like that, Big died.”

OMG. I could barely breathe, and I’m a bit shook just talking about it.

Did you watch? What do you think of how they handled both situations?