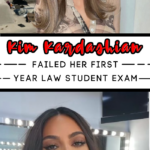 Kim Kardashian didn’t pass her first law school exam, and can you blame her, after the year she’s had?!?

I have been there — not with law school, but definitely in my college education — and it wasn’t a great feeling.

People have made fun of the fact that Kim was going to law school, but I say “Good For Her.”

Law School is ridiculously hard work for anyone, and applaud her at even attempting it!

Now, Kim’s dad was a big attorney — he even worked on the O.J. Simpson case — so she was all ready to follow in his footsteps.

She has even used her fame and platform to advocate on the behalf of those behind bars.

Alice Marie Johnson — who was given life-in-prison for a non-violent drug charge — was granted clemency after Kim lobbied President Donald Trump.

So, it’s obvious that she has some real interest in being a lawyer, and helping those who have been wrongly accused of offenses.

I am a failure. I spent six weeks straight, 10 to 12 hours a day, studying and it was so important for me to take this. And to not pass gets your spirit down and just makes you want to give up.

Her family has come to her side at this time, being a support for Kim.

I feel like dad would be really proud of you regardless, just the fact that you’re pursuing this.

But, Kim is upset that she spent SO much time working on this, and not getting to spend time with her kids through the whole ordeal.

She is also concerned about taking the Bar Exam in the future.

That’s what pisses me off. The fact that I spent all that time away from my kids, like I can’t do it again. I don’t have time. To do the next test is in November. And I’m filming the ending of our show, which will be so emotional. I have every birthday under the sun, you know, it’s my birthday—my 40th—I planned this whole trip and it’s too late to cancel. And if I fail again, it’s like, what’s the point?

It is possible that she could try to take the test again in November.

But, she doesn’t want to wait that long — she is frustrated and possibly a little burned out.

I feel like I just got to the end where I almost knew everything.

There is another test possibility in June — which means she would still have all that law information retained in her brain — but, is Kim done even trying to be a lawyer?

I don’t know, I really need to think about it.

We’ll keep you updated as we learn more info about Kim Kardashian’s attempt at becoming a lawyer.