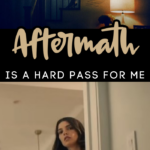 Netflix. The land you return to when you feel like procrastinating a lot. I’ve been visiting often.

I was super interested in watching their newest thriller, Aftermath, because it said it was based on a true story. With it being close to Halloween, it seemed like the perfect film to watch.

And although there were a lot of jumpy parts and a few ‘hold on to your seat’ moments, half of the time I couldn’t take my eyes off of Ashley Greene’s nose job. I miss her Twilight nose.

And the rest of my time was spent getting mad at this couple. A lot. Too much to enjoy the movie whatsoever.

The plot is essentially that she has an affair, her husband finds out, their counselor suggests a new start, so they buy a new house. Yeah, that’ll fix it.

Although she tries to work on their marriage, he keeps brushing her off. Then her affair partner becomes her boss somehow. And then her husband starts hanging out and flirting with a chick. Just bad.

Anyone who has been through an affair shouldn’t watch this. It’ll just make your blood boil. I get adding some drama to a thriller movie, but their attempt at reconnecting was more scary than the scary parts.

Then she gets kidnapped by creepy guy here who wants to replace his ex lover, who was also having an affair. Then the married couple kill him together and live happily ever after.

I DO NOT like whoever wrote this script. I was rooting for a divorce by the end of it. And the ‘true story’ was the mild side of it, not of the actual creepy guy living in the house. So yeah, don’t waste your time.