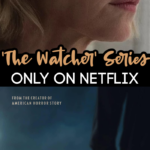 Netflix’s new thriller series has been in the works for quite some time now and it’s nearly here to show on your living room television.

From the creators of American Horror Story, this terrifying story is none other than a true one.

A plot which revolves around a family excited to move into their new home, their dreams are quickly shattered when they begin receiving anonymous letters from a stalker who is watching their every move.

After moving into 657 Boulevard in Westfield, New Jersey, the series emphasizes on the stalker’s obsession not only with the house, but also with the new family who’s occupying it.

The new homeowners, played by Naomi Watts and Bobby Cannavale realize their idyl suburban neighborhood is less than welcoming after being terrorized by a stalker who calls himself “The Watcher”.

“This house is my obsession — and now you are too,” a disguised voice says in the ominous trailer.

After reading multiple letters in the mail outlining that “The Watcher” has kept an eye on the house for generations, the family turns into nervous wrecks as the story eerily evolves.

And to make this story even more creepy, the real-life “Watcher” was never caught; Netflix’s new thriller series based on a true story premiers October 13.