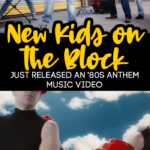 I was in high school when the New Kids on the Block were making teenage girls scream and cry.

It really wasn’t my type of music, but of course, I knew the songs because they played non-stop on the radio.

The same girls that were fans back then are still fans today and I bet they are literally flipping out right now.

The New Kids on The Block just released a new single and it features Salt-N-Pepa, Rick Astley, and En Vogue!

It’s called ‘Bring Back the Time’ and you have got to see the music video!

The video and song are a total tribute to the old-school ’80s anthem music videos.

I absolutely am here for this, it’s like a blast from my past and has bits and pieces of recreated music videos such as Twisted Sisters ‘We’re Not Gonna Take It’, Michael Jackson, Billy Idol, Devo, and more!

I laughed so hard and I think I just fell in love with New Kids on the Block!

It takes you down memory lane if this is the era you grew up in.