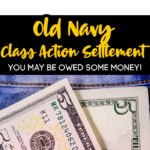 You may have seen the posts about a class action settlement from Old Navy and wondered if it was real, there are always so many scams floating around.

Well, it’s real and you may be owed some money!

If you made a purchase from Old Navy between November 12th, 2015, and December 2nd, 2021 you could be eligible for some cash back!

Apparently, there was a court case, Barba v. Old Navy et al., and that is where the class action settlement stems from.

The court case alleges that Old Navy used misleading or false listing prices that made customers think they were saving more than they were during sales.

Old Navy has totally denied it, but both sides came to an agreement.

The settlement was agreed upon to avoid the cost of an actual trial, which I guess would have cost a ton more than just reimbursing customers.

Who is eligible to participate in the settlement?

All United States citizens who made one or more purchases at an Old Navy Store or Old Navy Outlet Store or from the Old Navy website, excluding purchases made while in Missouri, between November 12, 2015, and December 2, 2021.

If you qualify you can get a $5 certificate that can be used at Old Navy stores, some people will qualify for two of the certificates, totaling $10.

To get two $5 certificates you will need to show proof that you made a qualifying purchase totaling over $90.

You can get one $5 certificate if you made a purchase of less than $90 and it appears that no proof of purchase is needed for that.