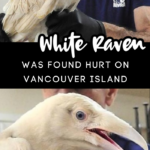 There is a White Raven being nursed back to health on Vancouver Island, and I am now obsessed.

Have you ever seen a white raven?

I didn’t even know these beautiful birds existed outside of TV shows and games, but that’s because they are pretty rare.

Due to their compromised immune systems, white ravens typically don’t do very well and survival chances have been slim.

You have to check this big feathered dude out!

Now, you might think that this is just a black raven with albinism, but you would be incorrect in your assumption.

White ravens have leucism which results in only partial loss of this pigment and their eyes are typically blue.

White Ravens have been spotted on Vancouver Island for decades, but they mysteriously appear and then disappear from time to time. Nobody knows if they just can’t stand the Vancouver winters, or if there is some other force that keeps them away.

Back in May, a juvenile white raven was turned in to North Island Wildlife Recovery Centre, which is located on Vancouver Island. It was in pretty bad shape, and they have been carefully nursing it back to health since.

It initially wouldn’t even eat on its own. The Recovery Centre had to insert a feeding tube to force-feed the poor bird.

Thanks to their steadfast care, this white raven has gone through two rounds of antibiotics and has responded well to the medication.

The white raven’s appetite has also improved, and it is even able to now eat on its own.

It looks like all the infections have cleared up, and the white raven may soon get a clean bill of health.

It is still getting an aggressive vitamin supplementation course to help continue to build up and attempt to strengthen its immune system. It’s a slow process with this raven as extended stress can really be detrimental to his immune system and the progress we have made to this point.

There is no word on what the Rescue Centre plans to do with the bird once it is completely done mending. I would assume that they will release it into the wild, but that is just an assumption on my part.

It’s always possible they will keep it for educational purposes, but we will just have to wait and see.