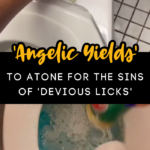 In direct response to the “Devious Licking” trend that took TikTok by storm at the beginning of the month, creators on the social media site are posting what they are calling “Angelic Yields.”

If you haven’t heard of the “Devious Licking” trend, let me just catch you up to speed.

“Devious Licks” are what the kids are calling the act of stealing things from their schools — usually in the school bathrooms.

I’m not talking about stealing staples and paperclips. They were stealing BIG things like water fountains, basketball hoops, whole sinks, toilet paper dispensers, and whatever else they could break and steal.

The stolen goods were called “Licks,” and the trend got so bad that schools were having to close bathrooms completely, and get the parents involved.

TikTok even had to remove the #deviouslicks hashtag (and #deviousliicks). If you try to search it, you get an error.

No results found
This phrase may be associated with behavior or content that violates our guidelines. Promoting a safe and positive experience is TokTok’s top priority. For more information, we invite you to review our Community Guidelines.

TikTok – What you get when you search #deviouslicks

So, some TikTok creators are atoning for the sins of the misguided youths. They are giving back to public restrooms by performing “Angelic Yields.” In these videos, they actually leave things in bathrooms, instead of stealing and vandalizing public property.

What are they leaving? Well, some are leaving toilet paper, soap in empty soap dispensers, coffee pots, money, some are even cleaning the bathrooms.

Now, it looks like SOME of these videos are done a bit tongue-in-cheek. Some people are simply sarcastic — verging on being a tad bit a-hole-y.

These “Angelic Licks” started as a sort of pay-it-forward campaign to combat all the destruction of property.

All these videos are set to some groovy smooth jazz music, and the on-screen caption that says “Just hit an angelic yield.”

It then shows someone doing something nice, instead of something destructive.

It isn’t exactly clear who started this “Angelic Yield” trend, but I hope it gets WAY more traction than the “Devious Licking” trend received.

It’s about freaking time that society did something for the good of the whole, instead of doing something completely idiotic and stupid.