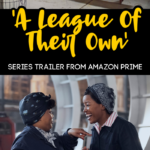 Ohhh I am so excited, I totally remember watching ‘A League of Their Own’ in theaters when it came out back in 1992!

Amazon Prime has created a new series about the Rockford Peaches and I can not wait!

‘A League of Their Own’ from Amazon is a retelling of the story from the original movie.

[The new series] evokes the joyful spirit of Penny Marshall’s beloved classic, while widening the lens to tell the story of an entire generation of women who dreamed of playing professional baseball.

Amazon said in a statement

[The new show] takes a deeper look at race and sexuality, following the journey of a whole new ensemble of characters as they carve their own paths towards the field, both in the league and outside of it.

Amazon said in a statement

Rosie O’Donnell will also be appearing as a guest in the new series.

I’m playing a bartender in one of the scenes at the local gay bar.

If you’ve never seen the movie, it’s the story of an All-American All-female Baseball League during World War II.

At that time, nobody was doing films about big casts with women. [Penny] just let us have that freedom to become these characters.