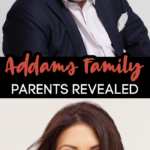 The Addams Family has been such an iconic family for YEARS!

There have been many different versions and casts for this family, but the newest seems to be the most upsetting to fans…

There is a new TV series coming out called Wednesday, based around Wednesday Addams, who is going to be played by Jenny Ortega.

The parents have just been casted, and it’s pretty all over the place of how people are feeling about it.

Catherine Zeta-Jones is stepping into the iconic role of Morticia Addams. I personally think she’s perfect for the role, but others don’t feel the same.

The role that people are more upset about is the role of Gomez Addams, played by Luis Guzman. A lot of people think he is a bad fit for the role.

But if you look at pictures of Gomez compared to Morticia, I think he actually may be a good fit. What are your thoughts?