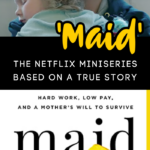 Are y’all watching Maid on Netflix? Good gosh, if you aren’t watching it, turn on Netflix NOW, and start the binge!

This show, which is all about the love of a mother, is hella good on its own, but did you know it’s based on a true story?

The 10-episode Netflix miniseries, which is produced by Warner Bros. Television, is based on the bestselling memoir, Maid: Hard Work, Low Pay, and a Mother’s Will to Survive, by Stephanie Land.

After fleeing an abusive relationship, a young mother finds a job cleaning houses as she fights to provide for her child and build them a better future.

Alex has a lot stacked against her

An unreliable, eccentric artist mom who legit needs meds, a dad she can’t rely on, friends who are not exactly a healthy option, no job, no schooling, no skills, an abusive relationship that she is hell- bent on not going back to.

At the total end of her rope, she is able to land a job cleaning houses. The pay is low, the work is hard, but it is SOMETHING.

Until it falls through, taking Alex’s hope with it.

Then, Alex totals her car — her place to live. And to make matters even worse, her ex-boyfriend hires a lawyer to try and take Alex’s daughter.

She just can’t catch a break. The world is stacked against her as a single mom with no employment and no place to live.

This story may not be the story of every mom out there, but it definitely resonates on a deep maternal level with every momma who has a little that she loves. That longing to do whatever it takes to make it in this world so your child can have a better life.

“In writing MAID, I hoped the book would change the stigmas that surround single mothers, especially those living in poverty,” [Stephanie Land] explained. “The stigmas that say we somehow deserve hardship because of the terrible decisions we made to get us there.”

There is a reason this miniseries is on the Netflix Top 10 list. You are going to want to start the series, and binge watch it until the end.

You will totally be rooting for Alex, and the tenacity and love she has for her child!

What happened to the real-life Alex, Stephanie land?

Stephanie was able to work hard and earn a bachelor’s degree in English from the University of Montana.

She was able to overcome, and ended up as a freelance writer — a long way from her start as a house cleaner!

In 2015, Stephanie published an essay about her time as a housecleaner on Vox. The popularity of the essay allowed her to get a book agent, and she got a deal with Hachette Books to write a memoir less than a year later.

Her memoir was nothing but successful, and now she is able to write and speak about her experiences, hoping that it helps bring awareness to the struggling moms out there.

As a side note, she was able to find one of the good ones, and is happily married to Tim Faust. Together they have four children, and are a happy and healthy blended family.

If you are struggling, please know that you aren’t alone. There is definitely hope for a brighter future.