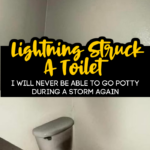 When I was a kid it was drilled into my head to NEVER take a shower or bath during a thunderstorm.

However, no one ever warned me about sitting on the freaking toilet!

I’m sure it’s rare, but, at the Oxford Apartment complex in Okmulgee, Oklahoma… the rare thing indeed happened and now I can never potty again during a thunderstorm.

The Okmulgee Fire Department in Oklahoma received a call and when they went to investigate they were a bit shocked by the scene.

In Oklahoma, Okmulgee fire crews say they had a bizarre lightning strike call at the Oxford Apartments overnight. They say the lightning came through the vent in the roof and struck the toilet, shattering it. Luckily, nobody lives in that unit, but apparently, this was a unit that was meant to be rented out this morning!

Lightning had struck and went straight through the roof, hit the toilet, and shattered it!

WOW ⚡ The Okmulgee Fire Department say a bolt of lightning came through a vent and shattered this toliet! Thankfully, no…

Thankfully this was a vacant apartment and no one was exploded with the toilet!

I have never heard of this happening before, but considering my luck… this would totally be how it all ends for me.

I mean yea, it would be an exciting way to go out, but I actually have a fear of dying on the toilet and being found that way, I mean people are still talking about Elvis…