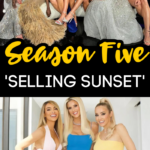 As the fifth season of ‘Selling Sunset’ has already dropped on Netflix, we’re already excited for season six!

Not to mention the clan adding a fresh face to the bunch, realtor Chelsea Lazkani!

Now if you’ve already binge-watched season five and waiting to find out if there will be a season six, you can settle your nerves because yes, there will be another season!

Returning for season six, we can assume that Chrishell Stause, Mary Fitzgerald, Heather Rae El Moussa, Amanza Smith, and Brett and Jason Oppenheim will return since they are the show’s regulars.

Davina Potraz is also likely be there along with Emma Hernan; although it’s not clear whether or not Chelsea Lazkani was only featured for season five or if she will become a regular later in the show.

For those who will likely not return is Christine Quinn; her appearance on the show is up in the air after being accused of bribing a client not to work with Emma Hernan at the end of season five.

A source who mentioned to Us Weekly says that Christine has even left the firm.

“It was Christine’s decision to leave the Oppenheim Group,” they explained.

Source who told Us Weekly

Christine herself also looks as if she’s subtly hinted on Instagram that she will not be returning to Netflix, since her profile bio no longer says ‘The Oppenheim Group’.

In a recent post, she also revealed that she and her husband together are starting a new company called RealOpen with a caption that read, “Why work for someone else when you can be your own CEO?”

While we’re all curious about what drama will unfold in season six, we can only hope that Netflix will announce the release date sooner, rather than later for the upcoming season!