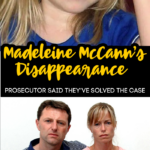 It’s been 15 years since Madeleine McCann disappeared from a hotel room in Portugal, can you even begin to imagine what that’s like?

She disappeared while her family was on holiday on May 3rd, 2007.

Well, prosecutors say they have solved the case with new facts and evidence!

Hans Christian Wolters is the lead German prosecutor in a new investigation of the disappearance of Madeleine McCann.

He said that the new evidence is “undeniable”.

We have found new facts and new evidence. It’s not forensic evidence but evidence and because of our evidence, we are sure he is the murderer of Madeleine McCann. We are sure he killed Madeleine.

Christian Brückner is who the lead investigator is speaking about.

Last week he was formally named as a suspect in the disappearance after a German documentary crew reported that he had worked as a handyman at the resort that she went missing from.

Christian Brückner is literally a bad man, he is currently serving time in prison for the rape of an American woman that was 72 years old.

He is also suspected and being investigated for raping and strangling a 13-year-old boy, as well as another disappearance of a little girl who was only 5 years old.

This makes me sick to even write about, but the stories need to be told to raise awareness of the evil things that happen in our world.

According to media reports, while searching Christian Brückner’s camper they found fibers that seem to match the pink pajamas that Madeleine McCann was wearing when she disappeared.

This statement from the media has not been confirmed nor denied by the prosecutor.

Hans Christian Wolters can’t really tell us too many details on the case because it is ongoing.

Of course, Christian Brückner completely denies involvement, he even claimed he couldn’t have done it because he was having sex with a woman at that specific time.

Conveniently, he doesn’t remember her name, but after investigating the claim about the woman, more incriminating details were revealed.

Madeleine McCann would have been 19 years old on her upcoming birthday, I do hope this case can give the family the closure they deserve, even though they still maintain hope that she is alive.