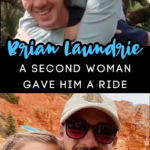 Between Brian Laundrie’s behavior before and maybe after the murder, to his parents refusing to help with the search for him, and even to him pinning cryptic messages on Pinterest. Dude has some problems, and I really hope the FBI are able to (sooner rather than later) fulfill that arrest warrant they have on him.

People are coming out of the woodwork with information about Brian. Miranda Baker even took to TikTok to tell how she and her boyfriend gave Brian a ride on Sept. 17. I’m still not sure why she just didn’t go to the police with the information to begin with.

Now, a SECOND woman has popped onto the scene, and said that Brian was hitchhiking along the side of the road, and she gave him a ride.

Norma Jean Jalovec is a snowbird resident (that means that she spends her winters in Florida and her summers elsewhere — in this case, Wyoming).

She just happened to see Miranda’s TikTok video, and realized that she had also given Brian a ride. It was on Aug. 29, and she dropped him off around 6:30pm or 6:40pm at the Spread Creek camping area. Remember, that’s where Gabby Petito’s remains were later discovered.

Norma Jean said she was on her way to a church that Sunday for the 5pm service. This church is about 1.2 miles from Jackson Lake Dam, which if you’ll remember is where Miranda Baker said she dropped Laundrie off.

They made a bit of small talk, and then he asked her if she’d drop him off at the Spread Creek dispersed camping area. She said she would, and she didn’t think anything out of the ordinary.

She did think it was a bit strange when he tried to get out of her moving car, instead of getting a ride into the park itself, but didn’t give it much more thought.

Jalovec said she hadn’t put two-and-two together until she saw the TikTok video by Baker, who had given a very agitated Brian a ride on September 17th.

Both Jalovec and Baker realized who they had given a ride to, because they saw information related to the case on social media. This really speaks to the importance of how social media is helping this case — although there are some that think all of these True Crime junkies on social media are getting in the way.

At the present time, Brian Laundrie is still at large. He does have a warrant out for his arrest, but it is on a separate bank fraud charge. He is, however, a “person of interest” in the Gabby Petito murder.