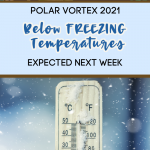 We are in the COLD part of winter, but I have some news you might not find comforting.

It’s fixin’ to get colder.

Every single state in the US — including Hawaii — will reach below freezing temperatures on Monday morning.

In fact, 16 states across the Midwest and Northern Plains will experience temperatures below zero on Monday morning. That covers 16% of the country and 41 million people.

They are saying a Polar Vortex is to blame, but what the heck is that?

That’s just a cool way to say some cold AF air is going to come down from near the North Pole, and freeze us all out.

This isn’t an isolated event. This happens almost every year.

During the winter months (the Polar Vortex) breaks down, sending cold air that has been bottled up, southward. It can be responsible for extremely frigid temperatures and huge plunges of cold air.

But, what does this freezing cold, bottles up air have to do with us?

Well, my friends, if you look at a map, 86% of the United States is fixing to be in a world of freezing temperatures and down-to-the-bone levels of cold.

You know what I mean — when it feels like the cold temperature is seeping into every nook and cranny, and even your bones are cold.

According to CNN, “Highs for much of the Midwest will run 15-20 degrees below normal.”

The only reprieve is if you live in sunny Southern California. It looks like that is the one area that is going to escape the Polar Vortex.

I’m thinking that it might just be time for a road trip to California!!