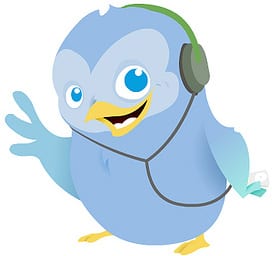 For those of you that don’t know, I am obsessed with twitter. I tweet about random crap all day. It gets me through all the book writing fun. I like meeting new people, and the world of twitter makes me smile.

But, I have a book I want published, and I want an agent to help that happen for me. I follow a few agents on twitter, and I occasionally comment on whatever it is they have to say. (Not because they are agents, but because I am addicted to twitter, and I like to comment on what everyone’s up to–but I digress.)

A couple of weeks ago, I got a helpful rejection from a literary agent’s assistant. I tweeted about it. Well, because I have talked back and forth to that particular person, she saw my tweet.

This could have gone one of two ways:

Well, it went the second way. Lucky me. Because that could have been bad! This got me to thinking–I could really get myself into some serious trouble with twitter!

But, it didn’t stop me-oh no it didn’t. A couple of days later I made an accidental dirty joke to an agent right there in my smackin’ twitter stream! Fortunately, she had a sense of humor and yet all was well in the twitter verse. But maybe I should walk away from this with a little lesson learned, eh?

So, what I want to know is-

How do we balance our writing careers and do the right thing with ALL these twittering agents and publishers in our midst?

Er. That second "requests for fulls" should say "requests for partials." And "reactions to rejections or disappointments." Stop looking at me like that, I'm tired. .-= Adri´s last blog ..smoulderingsea: @hikarukujo See why I said it almost made me cry? =-.

I try to leave out specifics when discussing queries, requests for fulls, requests for fulls, and rejections unless directly in conversation with the agent involved about that subject, and I don't bring it up to them. For instance, I was talking to someone else on Twitter earlier about how we both have partials out and I have a full out, and we're both getting antsy with waiting. I have no idea what agents/agencies she's submitted to. She has no idea which agents/agencies I've submitted to. We've both posted the generic "got another rejection" stuff as well, but not mentioned the specifics of what was said by whom. I follow the same rules in my blog, and take care to keep any reactions rejections or disappointments light. I may discuss what I've learned from a rejection, but not slam on the agency that rejected me - and I always try to end on a positive note rather than vilifying anyone for declining my query or story. The main rule to keep in mind is to not name names, point fingers, or bring up identifying specifics, because what you say can and will impact an agent/agency's reputation.