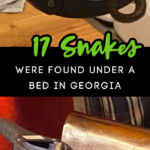 This is the stuff that nightmares are made of.

Trish Wilcher, who lives in Georgia, was getting into bed when she saw what she thought was a piece of dust under her bed — but then it moved.

Upon a little closer inspection, something else began to move, and she realized what she was dealing with — Snakes!

And then a second later another piece moved, and I went to my husband: ‘We have snakes!’

But, it wasn’t just one snake, on nay-nay!

There was a mommy snake and 17 of her newly hatched babies, just hanging out under her bed.

Her husband, Max, did the only thing he could think of. He reached for a grabber tool, picked all the creepy crawly critters up, and shoved them into a linen bag.

I’m not sure I would have been able to think through using a grabbing tool to take care of the reptiles. I would have run out of the house like I was being chased by a rabid bobcat.

He brought them out there to the creek area and released them there.

She posted the ordeal on facebook for posterity, and the story has since gone viral (I’m not even surprised).

I won’t be able to get into bed without first looking under it ever again!

As a side note, there might be another reason (besides finding a place to lay their eggs) that snakes might slither their way into the crooks and crevices of your house.

If you have a mouse problem, the snakes will come in and be more than happy to help you take care of that problem.

I’m really not sure what would be worse: the snakes or the mice! *Shudder*

The only thing worse would be finding a snake in your toilet AFTER you sit down!

1 shares
You Can Get An Inflatable Skeleton Flamingo To Put In Your Yard For Halloween
← Previous
I Just Finished The 'Fear Street' Trilogy And The Ending Has Me Changing My Entire Perspective
Next →
Click here to cancel reply.