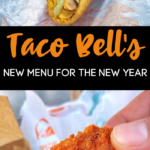 Taco Bell is doing more than just stuffing beef and cheese in a crunchy shell for the new year.

In fact, the popular fast food eatery is jumping in the chicken war between a handful of fast food chains and is adding crunchy chicken to menus.

Instead of stuffing crispy chicken between two halves of a soft bun, Taco Bell is adding bone-in chicken wings that might be crispier than the finger lickin’ good chicken patties or Popeye’s famous spicy chicken.

Alongside the new chicken wings, Taco Bell is adding a plus one and pairing the chicken wings with a spicy Mexican Queso dip.

A new Chipotle Cheddar Chalupa is also in the works which means our New Year’s resolution is only to try Taco Bell’s new reworked chalupa.

Finally, a revamped cravings value menu will also be added for quick and easy meals without having to break the bank.

Taco Bell’s changes will arrive shortly after the celebration of the new year around the second week of January!