Thanks to my super fly friend, Rhonda Stapleton, I just learned that today is Umbrella Day.

(cue obligatory graphic in celebration of this most random holiday) 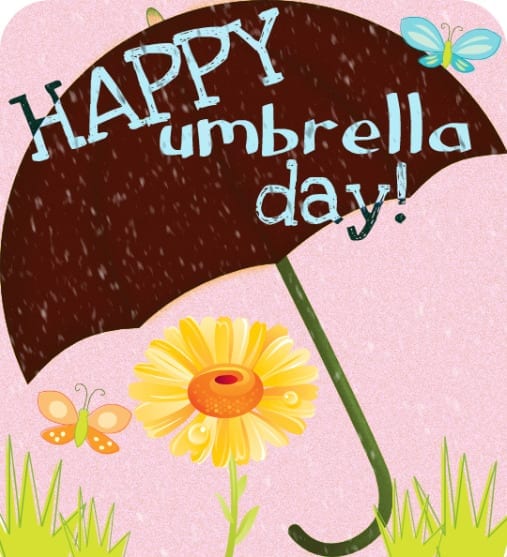 Now let me be the first (or second, or third, as the case may be) to admit that Umbrella Day is kind of a silly holiday, but honestly it’s no sillier than oh say VALENTINES DAY.

If you’re single then it’s just a slap in the face. If you’re married, then it’s just a night where the restaurants are ridiculously busy and if you don’t give the right kinds of chocolates then your significant other is going to be like eight different kinds of pissed– so screw that day.

Whoa, that rant up there wasn’t what this post was supposed to be about at all. This is supposed to be a post in celebration of the umbrella. You see, I want to be one of those people who has an umbrella when it rains, really I do. I want to pull a giant pink umbrella out and walk underneath it all willy nilly without a care for the treacherous thunderstorm booming above my head.

I don’t think I’ve owned an umbrella since high school.

Dude, I’m 31. That’s a long time to go without an umbrella. The other day it was pouring down rain and I didn’t want my daughter to get wet because she’d been coughing a little, so I took a laundry basket out of the back of my car and just sort of held that over her head while she ran in.

Dude, you read that right. I am incapable of owning an umbrella but there was a spare laundry basket just hanging out in the back of my car. I haven’t done laundry outside my house since like 1999 and yet… there’s a basket in my SUV dedicated to just that.

There was this one time when I took my little brother’s umbrella out of his car and replaced it with a WWF one so he would have to use it when he walked into school heh. (That was back when The Rock was into Wrestling, and you know–not pretending to be the tooth fairy.) Seriously, I even had this CD that I played in my car with the Rock anthem. He was so cool.

What, you’ve never heard that song before? Yeah, apparently me and the guy who made that tribute youtube video are the only ones.

Anyway, what I was trying to say is that I think umbrellas are cool, and they really serve their purpose well.

That always impresses me. Like, take this coffee cup I’m drinking out of right now. The coffee in there is like a zillion and nine degrees, and this tiny plastic lid is shielding me from scorching pain and misery. But, there’s like at least an eight percent chance that it’s just going to pop right off and I’m going to have coffee all down the front of my shirt. Now, I know that eight percent doesn’t sound like a whole lot, but when we’re talking hot coffee all down the front of my white shirt (I kid, like I’d ever wear a white shirt last time I wore a white shirt I dropped a french fry down the little v-neck part right into my bra) then screw that.

So, thanks Umbrella for doing your job! Happy you Day!

Ha.. interesting to say the least! I am the kind of person who buys about 500 umbrellas throughout their life because I put them in my car, take them inside to work (or where ever) and then leave them there.

I have seen these lovely little "pocket umbrellas" at Macys but I cant bring myself to purchase a $10 umbrella.. I like my dollar store ones. .-= Lindsay´s last blog ..I heart… Valentine’s Day =-.

I'm contemplating just tossing an old laundry basket in the back of the car and being done with it. :) .-= Rhonda´s last blog ..Another Year, Another Award, Another Blog Entry =-.

LOL - Too funny, really. I started carrying umbrellas again when I had to walk a block and a half from my car to the office for work. Last year I even splurged and bought one of those huge golf umbrellas. It's completely unwieldy just to carry, but man, it does a good jog. ;-)

@Jamie D. (@JamieDeBree), I think I should get one... it's not like they take up more room than a laundry basket, right?