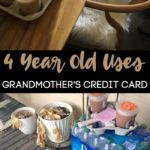 Typically when we see an enormously large charge on our credit card bill, we automatically think to ourselves “Did someone steal my credit card numbers?”

While we typically think a stranger from a random grocery store was the one who stole our pin, a family member is the last person we expect to be the culprit except for this grandmother, it was.

But it’s not what you’re thinking!

What looks like a harmless visit to grandma and grandpa’s house turned out to be an order for 20 when the little one got ahold of the shiny square card.

Thanks to @Mark Franks, the grandfather who decided to share the outcome on Facebook after his grandson got ahold of the card, as it turns out grandma decided to take a quick nap and that’s where the handful of food orders and several drink purchases were made to-go.

The collection of photos which show a buffet of coffees from Starbucks, a couple cases of water bottles, and bags of food from the coffee chain including two smoothies, we can only imagine what the total price of this order came out to be; not to mention the $32 tip mentioned in the caption!

Let’s just hope DoorDash or Uber Eats at least gave them a promotion on their massive order.

The viral Facebook post which has social media users belly laughing in the comments, has raked up almost 8 thousand shares and over 3 thousand likes while grandma and grandpa are trying to decide what to do with all of this newfound food!

Moral of the story?

Hide your wallets and consider sleeping after the grandchildren leave, just to be safe!