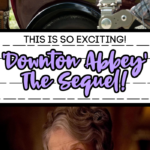 This will be a sequel to the movie that released in 2019. There were already rumors floating around, but now this is for sure the real deal and they’ve already started working on it!

Back in February, Hugh Bonneville, the actor that played Robert Crawley – Earl of Grantham, mentioned that he had seen the script for a sequel.

He had said that everyone was eager to start working on it.

We will make a movie. It’s the usual thing, the planets are circling, they’re beginning to get into alignment, but there’s this thing called coronavirus knocking around. Until that is under control in a sensible way, we’re not going to be able to get all those ducks in a row.

Things must have gotten worked out because production has actually already started!

Last week they started production with a screenplay by Julian Fellowes, the series creator.

After a very challenging year with so many of us separated from family and friends, it is a huge comfort to think that better times are ahead and that next Christmas we will be reunited with the much beloved characters of Downton Abbey.

Gareth Neame, producer of the film through Carnival Films

There hasn’t been any mention of the plot for the new movie yet. But, we do know that there will be some new stars coming in to join your favorites!

The new movie will also include Hugh Dancy, Laura Haddock, Nathalie Baye, and Dominic West! You can also count on seeing the original stars including Michelle Dockery, Maggie Smith, and Jim Carter.

The ‘Downton Abbey’ sequel is scheduled to be released in theaters on December 22nd, 2021! It’s like a Christmas present!

2 shares
Mountain Dew's Halloween Mystery Flavor For This Year Has Been Leaked
← Previous
It's Official, Michael Keaton Is Returning As Batman!
Next →
Click here to cancel reply.