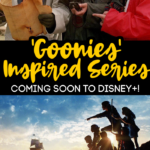 ‘The Goonies’ remains one of my all-time favorite movies from the 80s!

I mean… we knew it would be back in some way, shape, or form…

It was just announced today via Variety that a ‘Goonies’ inspired television project is coming to Disney+.

The new series will focus on a teacher who is helping her students re-create ‘The Goonies’ movie, I love that this is not a remake!

The series was previously in development into a pilot for Fox, however, they said it was “too young” for their network.

The pilot script was written by Sarah Watson from ‘Parenthood’ and ‘The Bold Type’.

Sarah worked nonstop to deliver this incredible script, we had our table read, and then the world shut down for COVID. So we came back many months later and finished the beautiful pilot, and it was an incredible cast, but unfortunately a little bit too young for Fox. And so we immediately swung into high gear and hit the town with it. We did not yet have anything in development at Disney Plus. It’s been another example of being able to carve a pathway where there wasn’t one by virtue of a great story, a great pilot, a great series. The deal has taken a while to make, but we’re really excited to be moving forward.

Clancy Collins White, exec VP and head of development, said in a statement

It’s called ‘Our Time’ and here is what they have to say about it so far:

Stella Cooper failed to make it living in New York, so she returns to her struggling automotive-based hometown with a heavy secret.

She becomes a substitute teacher in her old hometown and decides to help 3 students who are trying to fulfill their film-making dreams.

While helping the students she rebuilds her own hope and inspiration.

The film the students are making is a shot-for-shot remake of one of their own favorite movies ‘The Goonies’.