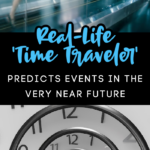 This is strange, and just a little bit creepy.

Javier, @unicosobreviviente on TikTok, first posted in February, and his videos show that he is the “lone survivor” in a desolate area that many think is Spain.

Now, of course, people are completely skeptical – just another dude trying to get TikTok famous, right?

But, to squash any doubt that might be floating around the interwebs about real-life time travelers, there is another account that has posted “proof” that time travel exists.

Aery Yormany, @aesthetictimewarper on TikTok, claims he is a real time traveler (he calls himself a time warper) from the year 2714.

He has made several predictions about the future, the near future, and he even has dates to go along with his predictions.

Aery’s menacing predictions are as follows:

August 3, 2021 – NASA will find a “mirrored” Earth, with opposite gravitational pulls, physics, and motion.

September 14, 2021 – A category six hurricane will hit South Carolina, and it will be the worst recorded hurricane ever to hit America.

October 20, 2021 – Eight humans will receive superpowers from an extreme energy that has to do with the sun. (Does that mean there will be a real-life Thor?!?)

December 14, 2021 – Three teenagers are going to unearth a T-Rex egg and also a device that will open a portal to an alternate universe.

February 2, 2022 – Atlantis will be discovered in the Atlantic Ocean, and we will find it housing human-fish.

Now, of course, there is no scientific proof to back up any of Javier’s claims — yet, right?!?

My head tells me that this is a dude pulling a stunt to get over a million views. *Eye Roll Emoji*

But, there is this little bit of doubt in the pit of my stomach that says, “What If?” *Wide-Eyed Emoji*

I mean, why wouldn’t he push his predictions back a bit to stay relevant just a little bit longer. I mean, we will all know by Tuesday, the third, if that he is lying.

And, once one of his predictions are debunked, that kind of kills the rest of them.

BUT, he could always counter that the “device” that was found on December 14 sent him spiraling right into that alternate universe.

What do you think? Obvious crap?

I guess we will know really soon!

To see Aery’s entire creepy-weird video, you can go HERE.

To see Javier’s eerie videos of completely empty buildings and streets in Spain, you can go HERE.