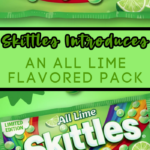 Skittles say they listen, and it looks like they’re right.

Mars Wrigley heard the complaints and cries, and have finally decided to remove green apple with an all new lime flavored Skittles pack.

You might recall when Skittles replaced the lime flavored candy with green apple back in 2013 and now, Skittles is giving back what the people have been asking for and some!

Instead of just substituting green apple for lime (no, that would be too easy), Skittles has decided to introduce a new pack of candy that only consists of lime flavored chewy Skittles.

Ditching the OG red packaging for a bright lime green look, Skittles new “All Lime” pack leaves the classic five fruity flavors in the dust in replacement for just one.

Let me remind you that this is a pretty big deal considering this is the first time Skittles is releasing an all one flavor pack of candy!

Skittles has also mentioned on social media that if the new All Lime Skittles pack sells out, the company might just consider bringing back the fan favorite flavor forever!

Skittles, if you’re saying what we think you’re saying, lime could be here to stay, and that is something that should not be joked about!

“Buy them out and marketing might bring them back forever,” said Skittles via Facebook in all capital letters.

The all new lime Skittles will be available this summer of 2021 at select stores nationwide, according to a PR rep who confirmed to Best Products.