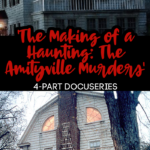 ‘The Amityville Horror’ movie is one that has terrified me since I was a child.

Just knowing it was based on a true story gives me the creeps and has triggered many nightmares over the years.

Epix will be releasing a 4 part docuseries on the real-life events that happened at the house and inspired the films.

The docuseries is called ‘The Making of a Haunting: The Amityville Murders’ and they will dig into the true story.

The story is based around the Lutz family and the horror they experienced after they moved into the home where Ronald DeFeo Jr murdered his family.

‘The Amityville Horror’ was first released as a book back in 1977 and the movies were based off of that book.

The Lutz family only made it 28 days living in the home before they left due to the disturbing events that were happening in the home.

Before the Lutz family fled the home, they invited the Warrens to come investigate.

Yes, the same married couple from ‘The Conjuring’ movies.

I’ve seen some things over the years that pointed out some things that made me doubt the Lutz family.

The story about the events that took place are very questionable.

Hopefully ‘The Making of a Haunting: The Amityville Murders’ docuseries will explore this more so we can separate truth from fictional additions.

As of right now there is not a release date for the docuseries.

As soon we know a date we will let you all know!