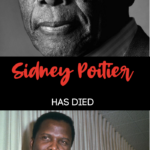 Wow, what a start to the year, Sidney Poitier has died at age 94 years old!

What an amazingly long life that was filled with firsts and so many huge accomplishments!

Sidney Poitier was Hollywood’s first Black movie star as well as the first Black man to win an Oscar for best actor.

It’s been an enormous responsibility. And I accepted it, and I lived in a way that showed how I respected that responsibility. I had to. In order for others to come behind me, there were certain things I had to do.

One of his most major accomplishments that opened things up for other entertainers of color was that he was a Black leading man in movies in the 1960s!

Sidney Poitier Was A Mircle baby

Sidney Poitier was the youngest of seven children and was born in Miami, Florida, on February 20th, 1927.

He was born very prematurely and honestly, wasn’t expected to live, but he did and he grew up to accomplish so much in his 94 years of life!

His first movie was in the 1950s and called ‘No Way Out’, he played a young doctor and this wasn’t a typical role for a Black actor to fill back then, so right out of the gate, he was changing things.

Racism was horrendous, but there were other aspects to life. There are those who allow their lives to be defined only by race. I correct anyone who comes at me only in terms of race.

Rest in peace, I will be watching one of my favorite Sidney Poitier movies today!