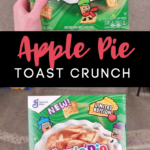 Apparently apple pie is exactly what we needed this fall season.

After Starbucks released their newest fall drink, the Apple Crisp Macchiato which apparently tastes exactly like a fresh baked pie from the oven, Cinnamon Toast Crunch is temporarily changing their o.g. flavor to something new and fall like.

Taking after Starbucks, the new cereal comes without any notice and apparently, it’s already stoked on some store shelves!

Since the new item was released on the down low, we only know a few details and from what it looks like, the new flavor has kept the cinnamon dusting with a new bold coating of apple pie flavor to make it taste just like grandma’s famous recipe.

Rather than a shiny and cinnamon-y milk that’s usually left behind in the bowl, you’ll have apple pie for leftovers.

The new and limited-edition Apple Pie Toast Crunch was spotted at Albertsons, a grocery store retailer across the states thanks to @chriscerealcrusader who discovered the new flavor just by chance!