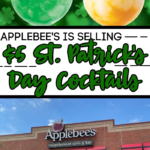 With Valentine’s Day in the dust, St. Patricks day is only days away.

To officially start the countdown to one of the luckiest days of the year, Applebee’s is putting the first foot forward with the help of Captain Morgan and Irish Whiskey!

Applebee’s is already selling holiday themed drinks at participating locations and for a limited time only in celebration of the very green day!

Introducing the Tipsy Leprechaun and the Pot O’ Gold Colada!

They’re calling the duo pair of drinks the $5 Saintly Sips because yes, they really are just $5.

Starting with the leprechaun that has had a little too much to drink, the Tipsy Leprechaun is similar to a Long Island Iced Tea but with an Applebee’s twist, featuring Jameson Irish Whiskey, melon liqueur, blue curacao, sweet & sour, and lemon lime soda.

You can expect the Pot O’ Gold Colada to include Captain Morgan and mango flavoring disguised as a brain freezing frozen piña colada.

You can also count on each drink to be served in one of Applebee’s signature big cocktail glasses and you can start sipping now until March 29th, meaning there’s plenty of wiggle room to make it a priority to take a trip down the street.