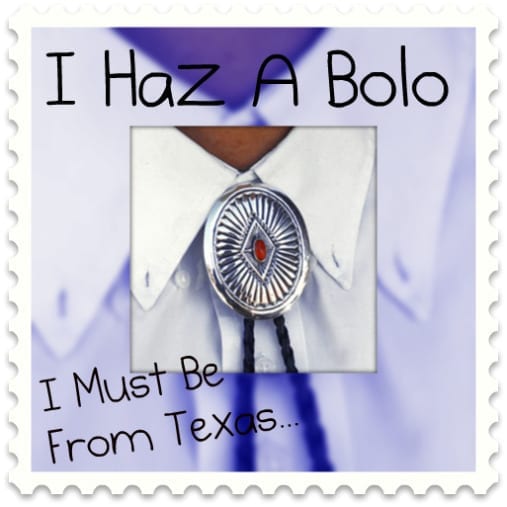 Okay, so here’s the thing. I’m from Texas. You know, the Lone Star State. Now, it’s important that you know there are some cowboys here, we do have a lot of trucks, and there is the occasional hoedown.

But Texas is more than that. Dallas is a freakin’ technological mecca, we have some really great schools, and um, most of us haven’t even been on a horse.*

So, when I was watching an episode of the best show ever to grace television Castle the other day, and I saw a man wearing a bolo tie, something died inside me.

I called to my husband in the kitchen, “See that guy in the bolo? Ten bucks says we find out he’s from Texas.”

He didn’t take the bet. He knew it was a lost cause.

About thirty seconds later, the character said something about how back in Texas those sorts of things just aren’t done.

Dammit. Why is that the cue for a Texas boy? I don’t think I’ve ever even seen a man wearing a a bolo out in public– and I’ve been here all my life.

But, I know enough about them to know that is the stereotypical outfit for Texas guys.

It got me thinking about other stereotypes in general. If we see a girl with ratty hair and a tacky accent, we assume she’s from Jersey. Blondes are from California… Corn fed Iowa boys wear flannel shirts and, um eat corn.

Ugh, I want to hate stereotypes, really I do, but the truth is, they make a writer’s job a little easier. I know part of our job is to bust out of those sorts of thinking and get people to believe things they wouldn’t normally believe, but the thing is… sometimes a guy in a Bolo Tie is just what you need to tell your readers that he’s definitely not one of those smooth talkin’ carpet baggin’ Yankees.

*Okay, that probably isn’t true. But most of us don’t ride horses all the time, and we for sure don’t ride them to work.

Actually the Bolo (or Bola) tie is making quite an impression, in the most UNEXPECTED of places. I live in a metro on the Southern most East coast of AFRICA?? and I own a few.

It maybe just a fad now in South Africa but my friends and I who wear the traditional 4-in-hand during the week and who want to look a bit more formal on the weekend have turned to the Bolo tie.

South Africa is an incredibly culturally diverse country (it historically drew Natives from elsewhere in Africa, then the British, Dutch & Portugese during colonialism, who brought Chinese and Indians with them - all of whom have been here for at least 200 years) and much more open to embracing other traditions if it serves a purpose.

I'm from California, under 50 years old and I wear Bolo Ties. I prefer them over the regular ties and at least for me I feel I look good in them. I used to live in Texas. Texas is not the home of Bolo Ties and the tie has nothing to do with Cowboys. Infact in the mid 1800s Cattle handelers were not called cowboys in Texas, They were called Cow Punchers. The term Cowboy came from the Great Plains and Colorado areas so Dallas even got the name of their Football team wrong."Bola" ties are a 1940s South Western (Arizona in fact) invention. But as far as stereotypes go you can thank the 1950s Hollywood and Grand Ole' Opry scene for perpetuating the myth and stereotype that all "Country People" wear Bolo Ties. Bolos were popular for about a 20 year period if that and it was during this time that the Bolo evolved from a crafted jewelry piece to these hokey Howdy Doody Buckaroo Cowboy themed type ties. This turned them into dumb Costume Jewelry in the eyss of most people. They kind of came back in the 80s and have now been relegated to the fringes of fashion. I think they're cool and I make my own Bolos. I prefer Arrowhead styled Bolos. The problem with most Americans is that they are always living for the moment and are a culturally ignorant people. Nobody ever takes the time to find out the origins and history of their own nation. Which is why so many stereotypes exist in the USA

@James, heh...exactly. As much as I want to HATE the stereotype, they exist... and television uses them like crazy!

wow neat article:) My sister has a neat site where she makes new bolos and updates old ones to sell. Bolo ties are popular with western wedding themes and square dancers. http://stores.ebay.com/id=2404119

Try Law and Order. They constantly use Arizona as a place for a character to be from if they need a generic place that is 'prohibitively far away'. The character usually has a button down plaid shirt, a leather bomber, and of course, if it's fancy, a bola tie. For the record, the bola tie is the official neckwear of New Mexico and Arizona because of a 1940s marketing ploy, but I think everyone from the Southwest gets what you are saying.

Great post! You're right - that IS the stereotype for Texas males. Even before I read the word Texas, I expected you to at least mention it just because of the pic. I like how you tied it to writing. :)

Thanks for visiting Book Dreaming and leaving a comment. So...who is the agent from Gatekeeper??