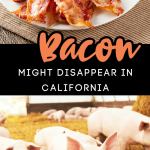 Bacon lovers, you might want to avoid California for the foreseeable future.

The voters in California have decided to opt for the welfare of the piggy over the availability of delicious pork products — including bacon.

In all fairness, it isn’t JUST pork that is about to be affected by this new animal welfare proposition that passed by an overwhelming vote way back in 2018.

Breeding pigs, egg-laying chickens and veal calves are what’s on the docket to be impacted by this arguable positive move by California.

This proposition, which is aimed at providing more room for the animals to do their thing, is ultimately more humane for the poor animals that are raised to provide food for the masses.

I mean, if you’ve ever seen how these animals are being raised, you’d probably vote to pass this animal welfare proposition as well.

Nobody really WANTS to know where their meat comes from, as long as it lands on their tables in time for meals.

But, this proposition is making people face the harsh realities associated with raising animals for the food supply chain.

The problem is, “only 4% of hog operations now comply with the new rules.” That means, as it stands now, products like bacon and pork chops are going to be scarce — and I’d venture to say that the price of the meat is going to skyrocket.

At one typical hog farm in Iowa, sows are kept in open-air crates measuring 14-square-feet when they join a herd and then for a week as part of the insemination process before moving to larger, roughly 20-square foot group pens with other hogs.

The details of this new California law aren’t exactly clear (or finished). As of right now, it requires 24 square feet of room in the pens, enough room to turn around and stretch if they need to.

There is also something about not keeping sows penned up in their crates 100% of the time. Many farms aren’t compliant with this measure.

Unless the courts intervene, and extend the time for pork producers to get in compliance with the new law, California is going to lose virtually all of it’s pork supply.

Now, California gets alot of its meat from farmers in Iowa, and to get in compliance, they are going to have to fork out the green.

We are very concerned about the potential supply impacts and therefore cost increases.

But, if they DON’T update their piggy housing, they face losing an entire state’s worth of business (currently 15% of all pork consumption in the state), which would be devastating to the pig farmers.

If they DO manage to update their pigpens (I don’t know. Are they actually called crates?), these farmers are, without a doubt, going to pass this cost that it takes to comply with these new rules on to the public.

Animal welfare organizations for years have been pushing for more humane treatment of farm animals but the California rules could be a rare case of consumers clearly paying a price for their beliefs.

We’ll have to watch what happens, and see if California is about to be porkless.