Hello Bookanistas! It’s Thursday and that means all over the internet authors are going wild for YA books.

Me? I’m laughing, I’m crying– I’m throwing a book across the room in frustration and then running after it because I just couldn’t put down Hannah Moskowitz’s Invincible Summer. 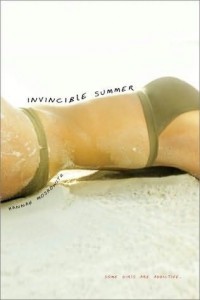 It’s a story of a boy and his love of the beach. That sounds so simple, right? WRONG– It’s complicated, it’s twisty, and it’s sand between your toes gritty. Sometimes you read characters that are so real you feel like you know them. This is exactly that kind of story. Anyone who doesn’t read it is missing out on making new friends.

You don’t want to miss out, do you?

I didn’t think so. Go buy this book. Right now.

And while you’re at it… don’t miss out on all the other awesome the Bookanistas read this week.

LiLa Roecker gets silly over Spoiled

Christine Fonseca has a passion for Possession – with giveaway

Shelli Johannes-Wells is in the grip of Possession

Shana Silver presents a Guestanista gushing over Between Here and Forever

Gretchen McNeil parties over The Anti-Prom

Carrie Harris sings out about Shift

Corrine Jackson delights in The Duff

Yes! Such a good book. I couldn't put it down. Love the "sand between your toes gritty." Perfection.

I don't read a lot of contemporary realistic fiction, but I've been hearing great things about this book. It might be one to break me out of my comfort zone.

Been waiting for this one!

This cover KILLS me. Isn't it made of gorgeous?