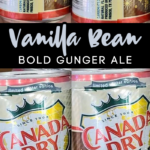 Whether you want to smell like vanilla bean or taste it, Canada Dry now has a flavor that tastes exactly like a scoop of vanilla from the ice cream shop down the road.

Dubbed the bolder version of Ginger Ale that tastes like Vanilla Bean, the flavor tastes exactly as it sounds.

A bolder version of the Ginger Ale you know and love that often settles stomachs, plus the added vanilla tones for the holiday season, equals the perfect beverage to sip on after stuffing our faces during Thanksgiving dinner.

Unlike the original can we are used too, this limited winter edition is dressed in a different color scheme.

Designed in cream and brown colors with yellow twinkles, you can find the individual cans sold at retailers nationwide thanks to a representative who told @markie_devo who spilled the details on social media.