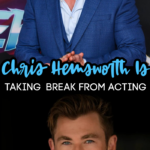 Chris Hemsworth is taking a break from work.

The famous Hemsworth brother has recently announced that he will be taking a break from acting.

During the fifth episode from the series Limitless, Chris Hemsworth meets with a doctor and it is afterwards revealed that Hemsworth is genetically pre-disposed to develop Alzheimer’s disease.

More specifically, Hemsworth has two copies of the APOE4 gene and one from each of his parent which in other words means that he has a heightened predisposition to develop Alzheimer’s disease.

“They took all my bloodwork and did a bunch of tests and the plan was to on-camera tell me all the results and then talk about how you can improve this and that,” Hemsworth told Vanity Fair. “And Peter Attia, who is the longevity doctor in that episode, and overseeing a lot of the show, called [“Limitless” creator] Darren [Aronofsky] and said, ‘I don’t want to tell him this on camera. We need to have an off-side conversation and see if he even wants this to be in the show.’ It was pretty shocking because he called me up and he told me.”

Although Hemsworth also noted that, “it’s not like I’ve been handed my resignation.”

Hemsworth is now eight to ten times more likely develop Alzheimer’s disease, and his grandfather who already is unfortunately been diagnosed with the disease as well.

“I’m not sure he actually remembers much anymore and he slips in and out of Dutch, which is his original language,” Hemsworth mentioned. “He’ll be talking [in] Dutch and English and then a mash-up and then maybe some other new words as well.”

Hemsworth went into further details about his recent predisposition diagnosis explaining that,

“It’s not a pre-deterministic gene, but it is a strong indication. Ten years ago, I think it was more thought of as determinant.”

Hemsworth also stated that Disney offered him another version of “Limitless” that omit his diagnosis, but Hemsworth made sure the scenes made the final cut.

While filming “Limitless”, Hemsworth explained that his genetic predisposition for Alzheimer’s isn’t the only reason why he’s chosen to take time off.

During shooting, Hemsworth met with death doulas and confronting the end of his life for the season finale which is also another reason that led him to the decision of taking time off from acting.

“It really triggered something in me to want to take some time off,” Hemsworth noted. “And since we finished the show, I’ve been completing the things I was already contracted to do.”

“Now when I finish this tour this week, I’m going home and I’m going to have a good chunk of time off and just simplify,” he said. “Be with the kids, be with my wife.”

“Look, if this is a motivator for people to take better care of themselves and also understand that there are steps you can take—then fantastic,” Hemsworth said. “My concern was I just didn’t want to manipulate it and overdramatize it, and make it into some sort of hokey grab at empathy or whatever for entertainment.”

You can view the trailer for “Limitless” below and currently stream the series on Disney+.