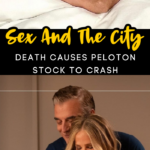 Um, what? What’s that phrase…don’t believe everything you see on TV? Some viewers need to understand that!

If you’ve been watching the newest Sex and the City reboot, ‘And Just Like That’, you will have seen our first tragic death thanks to Mr. Big. But what wasn’t expected was the tragedy on a product placement!

Mr. Big kicked the bucket using his Peloton bike and having a heart attack! After years of drinking and smoking, you would think that the bike wouldn’t be blamed…but it was.

Because of that episode, Peloton stocks have dropped almost 11%! I seriously can’t believe it. It’s a TV show. It’s not like he actually died on it. This is crazy!

Peloton revealed that they had agreed to have their product on the show, but had no idea in which it was going to be used. Lesson learned…

“Mr. Big lived what many would call an extravagant lifestyle — including cocktails, cigars and big steaks — and was at serious risk as he had a previous cardiac event in Season 6. These lifestyle choices and perhaps even his family history, which often is a significant factor, were the likely cause of his death.”