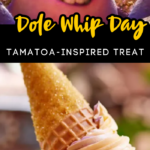 Disney World has a new, LIMITED edition, you’ll need more than one, swirl Dole Whip, and you have to just see it to understand how good this thing is!

Now, I am a big fan of the original Dole Whip — the delicious pineapple soft serve goodness. I am one of those crazy die-hard fans who waits 30 minutes (or more) in line at Aloha Isle in the Magic Kingdom every single time I go to Disney World, just to get my Dole Whip fix.

The OG Dole Whip first served up smiles way back in 1984, when the ONLY place you could get it was at that little shack known as Aloha Isle. I’m pretty sure I was one of the first ones in line. Ha!

Since then, Disney has expanded its Dole Whip presence to several places on the Disney World property, Disneyland, Disney Cruise Lines, and at Aulani Disney Resort and Spa. But, never fear, it’s just as tasty and exclusive to Disney as ever!

Hold on to your hats, because I have some exciting news. For the FIRST TIME ever, July 19th will be known as DOLE Whip® Day at Disney.

Dole Whip Day is a summer celebration of the most iconic treat at Disney Parks’ and we’ll be showcasing all of the different Dole Whip offerings at our parks and resorts.

That’s not all! In honor of this most delicious DOLE Whip Day, you can get a SPECIAL Dole Whip.

This special Dole Whip is a Tamatoa-inspired treat (if you don’t remember who Tamatoa is, he is the giant crab in Moana who likes everything shiny), and it is something I would wait in line to try!

This special Dole Whip will swirl together raspberry Dole Whip and orange Dole Whip in a white chocolate-dipped waffle coat that is then coated in a gorgeous gold sugar.

Now, unfortunately (Why does there ALWAYS have to be an “unfortunately”?!?) this particular Dole Whip is only going to be available through July 21st. It will also EXCLUSIVELY be available at Pineapple Lanai at the Polynesian Village Resort.

BUT, if you are anywhere on Disney World property right now, get yourself over to the Polynesian to try out this tasty creation!

If a raspberry / orange swirl Dole Whip doesn’t sound AMAZING to you, they will have plenty of other flavors available in celebration of Dole Whip day. Pineapple? Watermelon? Lime?

There has NEVER been a better reason to celebrate!! Dole Whip day is upon us!