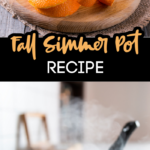 One of the staples during the fall season are the smells that come with the season.

The very breakfast you prepare in the morning can be used as leftovers to make a fall smelling simmer pot recipe, aka, aromas to make your house smell like the fall season!

To start, combine leftover orange peels from breakfast or slice a few from the fridge.

Grab a few apple slices and cinnamon sticks from the pantry.

A few drops of vanilla will suffice including a dash of nutmeg sprinkled with pumpkin spice seasoning into boiling water.

To top things off, you can never go wrong with more cinnamon; alongside the cinnamon sticks, add a splash of cinnamon powder.

Keep in mind to boil your water first in a small saucepan, then add all of your ingredients; after a few a minutes, turn down the heat to simmer and add water as needed to keep the fall aromas flowing throughout the house!

You can then enjoy the smell of fall around your home!