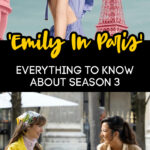 It’s been a hot minute since we’ve had the opportunity to live vicariously through Emily as she works and plays in Paris.

According to US Weekly, Emily In Paris is slated for a return to Netflix for both a 3rd and 4th season. Thank Goodness, right?!?

There is one thing that’s a running constant throughout all the seasons, and that is the fashion. It’s fire, is it not?!?

Sure, we don’t know a ton about Season 3 of Emily In Paris — it’s still in the filming stage, after all.

But, from the “first look” that dropped of the new season, we can already tell that they are BRINGING IT with the big bold fashion choices again this season.

My dream for season 3 would be to recycle costumes [from] season 1 — I don’t know if we can do that, but I’m dreaming to bring some of Lily’s most iconic outfits to the recycling workshop and see what they can do and recut and make.

The pictures that have been released make it obvious that the costume designers aren’t afraid to mix and match patterns, bring together different textures, and combine colors that you might not otherwise think belong together (but they just work!!).

They pay close attention to every little detail. Check out that ring!! Gah!! I NEED it!

It is obvious that they follow current fashion trends (like these big palazzo-style pants) but they kick the look up another level with bold colors and patterns.

When Is Emily In Paris Season 3 Coming Out?

We don’t have a release date just yet. BUT, we do know that they are currently filming. So, HOPEFULLY it won’t be too terribly long.

Hold on to your hats and sunglasses. It’s going to be awhile before we get a preview of season 3, but it’s the PERFECT time to go binge watch seasons 1 and 2 of Emily In Paris!