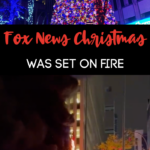 The traditional tree that sits out in front of Fox News was recently up in flames.

The 50 foot tree that stands tall in front of the news station in New York was recently set on fire.

50 feet of tree in flames, the decorated tree with bulbs and multi-colored lights drew black smock in the city of New York while firefighters tamed the scene.

While the tree only stood for three days before it caught on fire after midnight on Wednesday, a brand new tree will soon shortly arrive to be placed out front of Fox News and will also be redecorated, according to ABC7 New York.

49-year-old Craig Tamanaha was arrested on scene as the person of suspect who lit the tree, said ABC7 New York.

Police say Tamanaha climbed up a metal structure, stuffed newspaper in open spaces within the tree and proceeded to light the tree on fire with a lighter.

According to a criminal complaint he told police, “I have been thinking about lighting the tree on fire all day.”

The 49-year-old was charged with criminal mischief, reckless endangerment, arson, criminal nuisance, endangering others, criminal trespass, criminal tampering, and disorderly conduct with three prior arrests including two for drug possession and one for public intoxication.

Investigators say Tamahana may have also tried to set the Rockefeller Christmas tree on fire which is only a few blocks away from the first fire.

Tamahana was recently arraigned on supervised release, aka Tamahana is supposed to report to a person who will report back to the court as early as Thursday.

The new Christmas tree is expected to be redecorated and illuminated again around 5 p.m. today!