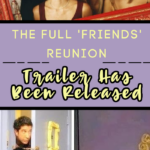 After lots of patient waiting, six fellow friends are back together on set!

After teasing fans that included filming in front of a live studio audience, a short clip that was released last week and even false filming rumors, Rachel, Monica, Chandler, Phoebe, Joey, and Ross are finally back sitting on the living room couch!

Finally, the full trailer of the show ‘Friends’ has recently dropped for the ‘Friends’ reunion episode!

Forget about the very short teaser that was released just last week, we have the real deal now and heads up, it’s a tears buster and a box of tissues by your computer screen is completely necessary.

If you have yet have to watch the full trailer, beware of a few spoilers right… about.. now!

The six celebrities visit their old set and lets just say they hug a bunch, laugh a lot, cry a few tears, do a sit-down interview with James Corden, and even perform a table-read!

The reunion episode is titled “The One Where They Got Back Together,” which was first announced in 2019 that was supposed to be filmed last year, but due to the pandemic, the cast and crew ended up filming just last month.

Putting aside the o.g. cast, there will also be guest appearances from big name celebrities including Justin Bieber, Lady Gaga, Reese Witherspoon, and the list goes on.

What’s even more comforting than seeing the crew back together on set, is the confirmation of the cast stating in an interview with People, that they all consider each other best friends in real life.

“Like family,” Jennifer Aniston said about her bond with the cast. “I don’t have sisters, but it’s what I imagine sisters would be like.”

The ‘Friends’ reunion episode will air on May 27th exclusively on HBO Max and you can watch the trailer, here.