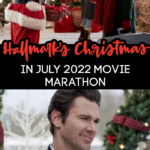 Summer is here, which means it’s not only the summer season of backyard bbq’s, but it’s also the season of Christmas movies premiering in July!

Ho, ho, ho, Santa doesn’t just stop by once every year, he makes a special trip for Hallmark so we can have a taste of Christmas even in during the dog days of summer.

So here’s the 2022 scoop regarding what to expect for Hallmark’s Christmas in July movie list.

In addition to reruns of fan-favorite Christmas classics, Hallmark will be showing three new movies set in December.

Starting with the first movie on the naughty and nice list, I mean Hallmark’s list, My Grown-Up Christmas List is the first new Christmas movie to premier on the channel on Saturday, July 9.

Featuring a journalist named Taylor and Luke who’s a military man, the two share “a special bond that grows between them over the course of five Christmases that they spend together and apart, according to Hallmark.

Next up, is Campfire Christmas, “romance rekindles for Peyton and her closest friends when her parents decide to host a holiday themed reunion before selling their family-owned summer camp,” according to Hallmark.

The third new movie to hit the big screen called Christmas in Toyland featuring a data analyst and a store manager who work together to save Christmas, but more specifically, a toy store.

“To save hundreds of jobs right before Christmas, a data analyst and toy store manager must work together to keep the in-store experience alive,” according to the Hallmark Channel.

Alongside Christmas movie watching and popcorn devouring, movie goers can vote on which movies they’d like to watch during the first weekend of Hallmark’s movie premiere.

Through June 19, you can vote in weekly polls every Monday on the Hallmark Movie Checklist app and can count on Hallmark’s Christmas in July movie marathon beginning July 1 up until July 31!