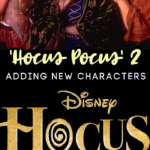 Alongside the famous red head, blonde, and brunette sister witches, Hocus Pocus 2 is adding a few new faces to the big screen.

In addition to the Sanderson Sisters, a handful of new characters wrapped up in the three witch’s trouble will be introduced throughout the film!

According to Collider, the second film revolves around the storyline of three sisters who accidentally bring the Sanderson Sisters back to modern-day Salem who then must embark on a mission to stop the child-hungry witches from bringing evil to town.

Director Anne Fletcher of 27 Dresses and The Proposal has taken over set.

Thora Birch who played Dani in the original movie has sparked conversation online that her character might make a return.

When the news broke that Hocus Pocus was approved for a sequel, Thora tweeted, “2022 will be ‘Mah-velous!” which has stirred a few theories online that Thora might return for production.

While filming is currently taking place in Lincoln, Rhode Island, our fingers are crossed and spell books are open that more details about production release quickly.