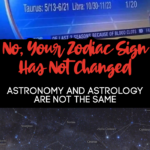 There is an image floating around Facebook right now that has many people freaking out, but it’s time to calm down.

I saw so many of my friends sharing this and they were literally freaking out, so I did some digging.

The post being circulated claims that there are new astrological dates, as shown in the image above, and there is another example below.

The posts show different dates for the astrological signs and also include a new one called “Ophiuchus” for the dates of November 29th to December 17th.

Many of the posts I am seeing say that NASA changed the zodiac to include a 13th astrological sign.

NASA says that it did not change the zodiac itself but included a sign that has been left out since ancient Babylonian times.

We see your comments about a zodiac story that re-emerges every few years. No, we did not change the zodiac. When the Babylonians invented the constellations 3,000 years ago, they chose to leave out a 13th sign. So, we did the math.

The tweet from NASA links to its Tumblr page that explains it all in detail.

They explain how the Babylonians had divided the zodiac into 12 parts and chose a constellation for each one of the calendar months, even though there were actually 13 constellations in the zodiac.

But even according to the Babylonians’ own ancient stories, there were 13 constellations in the zodiac. So they picked one, Ophiuchus, to leave out. Even then, some of the chosen 12 didn’t fit neatly into their assigned slice of the pie and crossed over into the next one.

Astrologers have spoken out about Ophiuchus and say that your zodiac sign has not changed.

As an astrologer, I can assure you that your zodiac sign didn’t change. Ophiuchus is a real constellation, but it’s not a zodiac sign. As you may know, there are many constellations in the sky, but not all of them are included in the zodiac.

Even though Ophiuchus is indeed a constellation, it is not a zodiac sign.

Ophiuchus doesn’t have anything to do with the 12 zodiac signs that have been in use, so please stop freaking out.