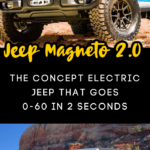 Jeep says its new electric Wrangler concept vehicle, which is based on the traditional Wrangler Rubicon SUV, goes 0-60 mph in 2 seconds. That’s some big power, right?!?

Not only does it have that get-up-and-go kick, it changes the brand from being the maker of gas guzzling Jeeps into the makers of zero emissions vehicles.

Now, this Jeep isn’t exactly available yet, but Jeep teased it Friday online. This concept vehicle is to gauge consumers’ interest in the new Jeep.

Concept vehicles are custom products typically built by automakers to gauge customer interest or showcase the future direction of a vehicle or brand.

Jeep has named this awesome new vehicle the Wrangler Magneto 2.0. Why 2.0? It is a redesigned version of a concept SUV Jeep that they introduced last year.

The Magneto 2.0 promises to be a huge improvement over last year’s Jeep concept vehicle.

The Magneto 2.0 includes a host of improvements over last year’s concept SUV, including acceleration that promises to put Lamborghinis, Ferraris, and McLarens to shame. Jeep says the Magneto 2.0 can sprint to 60 mph from a standstill in two seconds flat. That matches Tesla’s $135,990 Model S Plaid sedan, regarded as the quickest production car in the world.

Will we actually get to see this concept vehicle in action?

If you happen to be at the Easter Jeep Safari, an annual gathering for off-roading enthusiasts in Moab, Utah, you can catch a glimpse of the Magneto 2.0.

Jeep will be there showing off several concept vehicles — one of which happens to be Magneto 2.0.

Can you even imagine. This Jeep is going to be hella cool!

This is only the beginning for Jeep.

Christian Meunier, the CEO of Jeep, has gone on record saying that EVERY new Jeep will have some form of electrification within the next few years.

I can’t wait to see what they come up with! I’m going to be a Jeep convert before you know it!