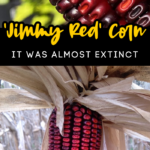 There is a variety of corn that is a deep dark red color — it resembles the inside of a pomegranate — and I totally want to try it!!

If you haven’t heard of this red corn, you aren’t alone. This beautiful corn was brought to North America nearly 200 years ago, and cultivated by the Native Americans.

The thing about this incredible red corn, though, as the years went on, fewer and fewer people grew it, and it was thought to be an extinct variety.

That is — until now!

What Is Red Corn?

Back in the day (like a century ago), this corn was brought to Charleston, SC, where bootleggers got farmers to grow it for the purposes of making moonshine.

This red corn had a unique flavor profile, with a punch of cinnamon-spice, marzipan, and light cherry — not the flavor that you’d never expect coming from a kernal of corn. It made some hella good moonshine, though!

Even up until the 1980’s, if you knew the right places to go, you could score yourself some of this red hooch (made from these red corn kernels) on the down-low.

If you knew the right people, they’d sell you delicious food out their backdoor kitchen and you’d get a jar of Jimmy Red hooch with it. But though I knew the hooch, I never knew the corn

But, over the years, it became harder to find the “Jimmy Red” corn that was grown to make the moonshine. Eventually, it was thought that this particular variety of corn was gone forever.

What Happened To “Jimmy Red” Corn?

The bootleggers that grew the corn and made the moonshine eventually died off, taking the unique red corn with them.

Back in the early 2000s (My gosh, can you believe that was 20 years ago?!?) the last bootlegger was about to pass. He was no longer able to make the “Jimmy Red” moonshine, so he quit growing the crop — the last crop known to exist of “Jimmy Red” corn.

The corn almost died with him. Two ears were rescued from his plot and gifted to celebrated local farmer and seed saver Ted Chewning.

Mr. Chewning is a lover of seeds. He loves to save and give a new life to crops that were nearly extinct.

He has revived nearly extinct corns, beans, heirloom radishes, watermelons and field peas. He rescued Jimmy Red as well, growing it and saving kernels each year, increasing the seed stock.

Over several years, farmers cultivated and grew this red corn, and it eventually made it into the hands of High Wire Distilling Co.

Not only was a bourbon created from this tasty red corn, but chefs found that they could use it as a unique and flavorful addition to many dishes.

Charleston chef Sean Brock, also grows it himself and serves the ultra-local Jimmy Red grits, cornbread and flapjacks at his restaurants McCradys and Husk.

Now, I don’t know about you, but I’m about to plan a road trip to Charleston to try all the things made with this red corn!!

Can You Grow “Jimmy Red” Corn?

YES!! It is an heirloom crop for which you can buy the seeds. It’s kind of like growing heirloom tomatoes or heirloom peppers, it’s just a different kind of seed.

Now, I’m not a gardener. What’s the opposite of a green thumb? I have that.

BUT, if you know what you are doing, you can have glorious stalks of this “Jimmy Red” corn by this summer!

You can use this corn to make all kinds of things. It just has to be processed, but you can use it to make grits, hush puppies, pancakes, cornbread — you basically substitute the regular cornmeal for “Jimmy Red” cornmeal (which you can process in a coffee grinder or something like a Vitamix).

I’d use it for a splash of color in my fall decorating, but that’s just me. I’m a sucker for the beautiful deep red color of the “Jimmy Red” kernels!

However you choose to use the “Jimmy Red” corn, you HAVE to get your hands on some!!

Your baking is about to become next level. You’re welcome.